70
Speakers
We have 70 confirmed speakers. Click to see who is speaking.
1500
Attendees
Register Today!
A1


January 28th 1986 - the space shuttle Challenger explodes just one minute after launch. As the world looked on horrified, few realised that this was an inevitable accident that had been predicted by the designers for years. Indeed, the day before the key engineers believed that there was “essentially a 100% probability of disaster”.

After the accident NASA realised that they had pushed the boundaries too far and embarked upon major management reforms. Sadly the reforms made the launches look almost too safe and as a result over the subsequent years standards and relationships slipped once more.

Then in February 2003 – the Space Shuttle Colombia burns up on re-entry and the entire crew perish. The chilling fact was that this was a management repeat of the Challenger disaster – NASA had not truly learned the lessons of the past.

agile
the world around us
teams
communication
keynote 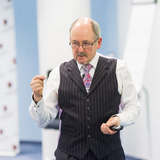