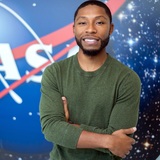 Acknowledged by Forbes Magazine as one of '30 Under 30 Science' honoroees, Kenneth Harris is known for delivering thoughtful and dynamic leadership on programs of critical national and international importance.

Kenneth is a Senior Project Engineer for The Aerospace Corporation contributing to both DoD and NASA payload missions. In this role, Mr. Harris is responsible for developing procedures and implementing processes to defend on orbit satellites from physical and cyber threats. The attainment of which leads to the successful data collection and orbital life of the mission. The satellite asset protection procedures and analysis will allow spacecrafts to be monitored for hackers and anomalous threats from the designated Operations Control Center.

Prior to this role, Mr. Harris served as the Deputy Lead Integration Engineer for the James Webb Space Telescope’s Integrated Science Instrument Module Electronic Components (ICE). Mr. Harris led a team of 10 engineers to successfully integrate, the main electronic payload of JWST, to the Backplane of the Optical Telescope Element (OTE) Primary Mirror. This was performed in North Americas largest cleanroom, the Space Systems Development And Integration Facility (SSDIF). Mr. Harris’ leadership on the JWST program ranks him as one of the youngest African Americans in NASA’s history to lead an integration effort on a multi-billion dollar satellite mission. Since joining NASA in 2008 as an intern, Mr. Harris has held positions of increasing responsibility including; Mechanical Engineer, Integration & Testing Lab Manager, and Senior Systems Engineer. Mr. Harris’ honors and awards extend beyond his professional service to recognition of his tremendous leadership in the STEM field and international community. He currently serves as the District 7 Member of the Board of Education in his hometown of Prince George’s County Maryland. Through which he champions the importance of early STEM exposure and engagement. In 2018 Mr. Harris delivered a TEDx Talk to over 500+ students concerning the power of mentorship and guidance. He was internationally recognized in the Project Management Institute Future 50 in 2020 for his incredible leadership at NASA on the local and international level. Mr. Harris also serves as a Science Show Host for the Seeker: Elements Series capturing nearly 1M monthly views and has also appeared as a featured keynote speaker at a number of professional events, international conferences, and symposia.

Mr. Harris graduated with honors from the University of Maryland, Baltimore County with a Bachelor of Science degree in Mechanical Engineering; he then completed a Master’s degree at Johns Hopkins University in Engineering Management and is currently a doctoral candidate at George Washington University. A lifelong Maryland resident Mr. Harris, his wife, son & their two dogs reside in Maryland. When not leading space programs or inspiring students to realize their full potential, Mr. Harris enjoys fine cuisine, traveling internationally, and evaluating sustainable solutions to impact global climate change.

Join him at GOTO Copenhagen for a powerful presentation that will leave you anxious to not only advance your career but to look for the next great explorer you can influence.