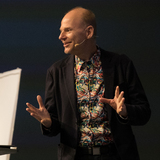 Erik Meijer has bridged the gap between theory and practice for most of his impressive career, which includes a work with Microsoft, Netflix and Google. Former winner of Microsoft Outstanding Technical Leadership award.

Today, Erik Meijer is the director of engineering at Facebook.

He is perhaps best known for his work on, amongst others, Haskell, C#, Visual Basic, and Dart programming languages, as well as for his contributions to LINQ and the Reactive Framework (Rx).

Most recently he is on a quest to make uncertainty a first-class citizen in mainstream programming languages.